WASHINGTON, DC The internet has been abuzz with rumours that the Mac maker will dip its toes into the auto market, and while its easy to get caught up in the speculation, theres plenty of reasons to think it wont happen.

But having the resources to physically produce a product is only part of the equation. Thats the fun, gee-whiz part that gets everyone excited. But the rest of the equation the boring part is if its actually feasible for Apple to make a vehicle intended to sell millions of units, build it to last for a couple of decades, set up a way to sell it and service it, and overcome the burdensome regulations that surround the industry.

Thats where everything starts to break down, and thats why there are at least four reasons why Apples not coming out with its own car. Lets take a look: 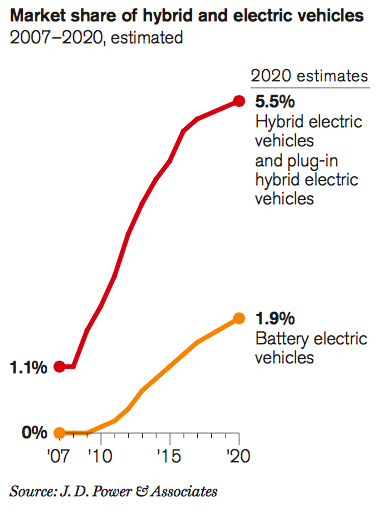 1. Electric car consumers are still on the fringe
Lets assume Apple wants to make an electric car, as opposed to one with an internal combustion engine. After all, this is Apple. But vehicle batteries are still very expensive and charging stations despite Teslas valiant efforts are still sparse. Of course batteries are always getting better and cheaper, and Tesla building its ownGigafactory will eventually drive those costs down more (assuming Apple could hypothetically buy batteries from Tesla in the future).

But the demand for electric vehicles doesnt even come close to demand for traditionally powered cars. The Economist pointed outearlier this month that the Nissan Leaf is the best-selling electric car in the world yet it only moved 40,000 units last year.

An MIT Technology Review report said that, The share of battery-powered vehicles will grow but will remain small through 2020, largely because of high costs. In this case, small means just 1.9% of the market.

Apple wont spend billions of dollars to sell tens of thousands of electric cars. Even if it gets lucky, a hundred thousand cars still wouldnt be worth the cost. Unlike Apples gadgets, people wont stand in line to trade in their cars for an Apple one they simply wont be able to afford to.

2. It takes more than a disruptive attitude to up-end autos
An Apple car also faces the hidden problem of regulation. The automotive industry is clouded with (needed) government regulation, which protects consumers, but slows down innovation. These arent pocket gadgets after all, human lives are actually at stake.

This isnt an industry companies just jump into and hit the ground running. And no,Tesladidnt just jump into it. Tesla is disruptive to be sure, and the company builds amazing electric vehicles that continually receive top-notch ratings. But lets not forget it took five years from Teslas founding to releasing the Roadster its first vehicle and it sold a whopping 2,400 of them.

Thats not to put down Tesla, its just an example of the pace it takes to get a new car company up and running. Apple may be disruptive, but its not a scrappy, young company burning lots of cash so it can bring EVs to the masses. Also, its important to remember Teslas still not profitable (which wont happen until 2020 according toe CEO Elon Musk). Meanwhile Apples gotten very used to big profits.

3. Get ready for lower margins
Which leads us to the next problem: profit margins. In an interview with Bloomberg earlier this month former General MotorsCEO, Dan Akerson, said of Apple entering the automotive market, I would be highly suspect of the long-term prospect of getting into a low-margin, heavy-manufacturing business.

If we take a look at the profit margins of Apple compared to GM, Ford and Toyota we see exactly what Akersons talking about: 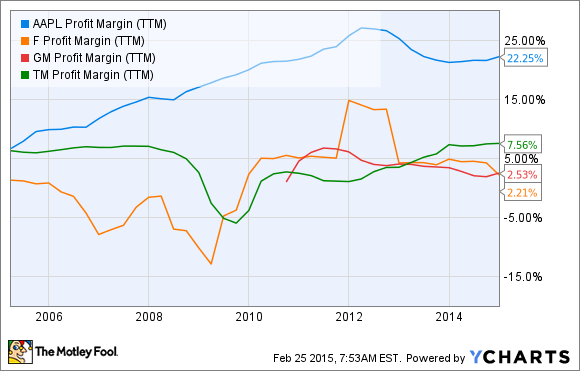 Toyotas the worlds largest automaker (by sales) and its profit margin is less than 8% compared with Apples 22%.

You can bet Apple wouldnt stand for the low margins Ford and GM have, or even Toyotas. Low margins arent in Apples wheelhouse and if it wants to overcome that hurdle then itll be selling cars at exorbitant prices to get them, and moving just a handful of cars in the process.

Service, selling, and manufacturing nightmares
Each one of these issues is a major headache, but lets lump them all together as the final nail in the coffin for an Apple car.

Apple generally has great customer service, but having an Apple Genius tapping around on your phone isnt like having a car fixed. Were talking about setting up service stations around the entire United States (presumably the first place Apple would start selling its vehicles), or at the least partnering with other established carmakers to utilize their service mechanics, with special training from Apple of course. Thats quite a network to setup.

And then theres selling the vehicle. Teslas had a rough go at it, suing states to allow the company to sell directly to customers. Ultimately, this will be cleared up, and the country will come to its senses and allow Tesla to sell products to willing customers (this is America, after all). Apple may not have to fight the same battle if all this gets fixed before the rumored Apple car comes out, but were still years away from direct sales being a non-issue.

Finally, we come to manufacturing. Vehicles have thousands of parts in them, most of which Apple knows nothing about right now. Making consumer devices isnt easy, but its certainly not the same as making a reliable vehicle that safely moves humans from point A to point B. Hiring a few automotive executives doesnt fix this either (Apple has already hired the former Mercedes-Benz head of R&D). This requires an entire company within a company to get all the needed parts suppliers on board for a new vehicle, tooling and retooling designs, and getting manufacturers to put it all together.

Apple will certainly change the auto industry
As with any new product, timing is everything. Apple is famously adept at getting the timing of its devices right, which makes it hard to bet against the company if it is indeed working on a car. But being good at timing, great at entering new markets, and superb atmaking devices doesnt mean Apples ready to sell a car to the masses.

Apple will certainly change the automotive industry with its technology and it already has but an Apple-branded car on showroom floors wont be how it does it.

Here at the Motley Fool, we focus on investing in great qualitybusinesses like Apple for years rather than months. It’s over that kind of time horizon that we can make sensible judgments on how a business is likely to perform, and whether the price is right.If you’d like to see what I’m talking about, thisinvestment dossierfrom our top Fools may be of interest to you.

Do NOT buy this stock

Theres lots of opportunity out there in todays market but theres also PLENTY of danger.

In anticipation of Champion Shares PROs brief opening to new membership a few short weeks from now, the analyst team behind the Motley Fools most exclusive service has agreed to share 1 stock they believe YOU would do best to avoid.

PRO research is rarely made available to the general public. To find out the name of this “don’t buy” company — and to claim your 100% FREE copy of Steer Clear Stocks right away — simply click here.

Chris Neiger has no position in any stocks mentioned. The Motley Fool UK owns shares in Apple.