Will The Coca-Cola Co. Be Around 100 Years From Now?

And just what caused the largest single day dip in its stock price in over six years for one of Americas most beloved beverage makers? As theWall Street Journalreported:

Coke continues to flail around for a solution to the shrinking ranks of soda drinkers in the U.S., China, Brazil and elsewhere. Profit was down 14% in the quarter, volume targets were missed, and Coke lowered its long-term revenue target and warned it will miss its profit target not only this year but next.

While it has clearly been one of the best investments over the last century as Warren Buffett tells us, $40 invested in Coca-Cola when it went public in 1919 would beworth more than $10 million today such disappointing results have caused many to wonder exactly what the future holds for one of the greatest icons of American business success.

All of this begs the question, will Coca-Cola be around 100 years from now?

The simple answer
While were all likely familiar with the disclaimer required by the SEC, performance does not necessarily predict future results, the simple answer is:absolutely.

But it isnt just that Coca-Cola will be around 100 years from now, but all signs point to the fact it will likely continue to thrive.

Incredible expansion
Although this is an investing website, when considering what the next 100 years will look like for a company, a glance at its latest bottom line results wont do much good. Instead we must step back and consider the bigger picture.

At its core, what exactly does Coca-Cola do? It sells drinks of course.

And just how well is it doing that? Consider that over the last decade, the number of Coca-Cola products consumedeach dayhas risen by 600 million: 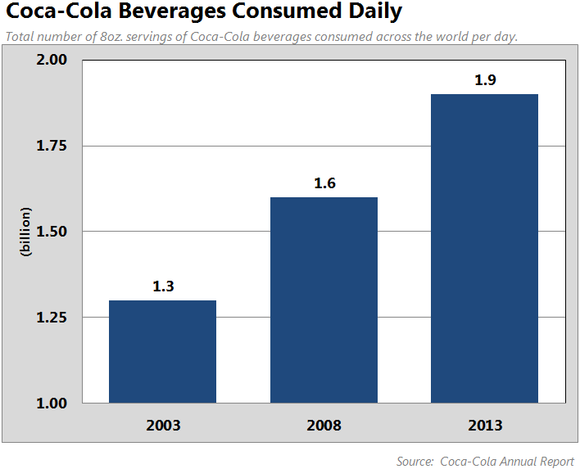 Said a little differently, 219 billion more 8 ounce servings of Coca-Cola products are being consumed each year. Or if you want to be even more specific, that amounts to nearly 7,000 additional drinks each second. To put that into perspective, when it was founded in 1886, just nine beverages were served each day.

All of this is to say, Coca-Cola has been growing at an incredibly rapid pace over the last 128 years, and it has no sign of slowing down anytime soon.

Billion dollar brands
So how has Coca-Cola delivered such incredible results? Consider for a moment the words of Warren Buffett from his 2007 letter to shareholders:

A truly great business must have an enduring moat that protects excellent returns on invested capital. The dynamics of capitalism guarantee that competitors will repeatedly assault any business castle that is earning high returns. Therefore a formidable barrier such as a companys being the low- cost producer (GEICO,Costco) or possessing a powerful worldwide brand (Coca-Cola,Gillette,American Express) is essential for sustained success.

Buy commodities, sell brands has long been a formula for business success. It has produced enormous and sustained profits for Coca-Cola since 1886 andWrigleysince 1891. On a smaller scale, we have enjoyed good fortune with this approach at Sees Candy since we purchased it 40 years ago.

With a value of nearly $82 billion, recognize Coca-Cola itself is the third most valuable brand in the worldaccordingto Interbrand. In addition, Sprite, a Coke product, has a brand value of $5.6 billion, placing it 72ndon the list, ahead of other well-known brands likeStarbucks,Chevrolet, andRalph Lauren. In total, of its 111 total brands, 17 have a value of over $1 billion.

And its not just that its brands are valuable, but they are also beloved. At the time of writing, Coca-Cola has nearly 90 millionFacebookfans, which is nearly twice as many at second and third place brands Red BullandMcDonalds combined.

Knowing one of the greatest investors of all time believes brand value is a key to success, there is much to like about the position Coca-Cola has placed itself and its brands in.

An eye toward the future
With its remarkable success and incredible brand power in mind, it must be noted that Coca-Cola has not been content to just rest on its laurels and believe success will simply come its way.

Knowing consumer habits and dynamics are changing, it has aggressively pursued equity stakes in companies likeGreen Mountain KeurigandMonster Beverage Corporation, and it now owns roughly 16% of each. In addition, it boughtGlaceau the company which makes Vitaminwater for $4.1 billion in 2007.

In many ways, Coca-Cola has taken a page out of the handbook of BuffettsBerkshire Hathaway, as it has continually recognized its need to use the massive amount of cash it generates to make acquisitions that will in turn continue to deliver more and more value to shareholders.

And that is to say nothing of the countless amounts of cash Berkshire Hathaway has received in the form of dividends.

With that said, its no wonder why he has so happily heaped praise on Coca-Cola throughout the years.

But what does he think thenext100 years will hold for Coca-Cola?

Whether the currency a century from now is based on gold, seashells, shark teeth, or a piece of paper (as today), people will be willing to exchange a couple of minutes of their daily labor for a Coca-Cola or some Sees peanut brittle. In the future the U.S. population will move more goods, consume more food, and require more living space than it does now. People will forever exchange what they produce for what others produce.

Its no wonder he admitted hed never sell a single one of his 400 million shares.

After all, he himself once said, time is the friend of the wonderful business.

Have You Left It Too Late To Invest In Property? Avanti Communications Group PLC: A ‘Story’ Stock Gone Sour