Will Google Inc Start Giving Back To Shareholders In 2015?

A version of this article was originally published on Fool.com

WASHINGTON, DC Of the major tech giants, Google (NASDAQ: GOOG.US) (NASDAQ: GOOGL.US) is one of the few companies that have yet to implement a capital return program. MicrosoftandIntelhave long had programs in place, while Apple (NASDAQ: AAPL.US) started one in 2012.

Amazon.comand Facebook do not give cash back to shareholders, since Amazon.com doesnt really make much money and Facebook is still in growth mode (and the social network is relatively young). But Google is large, mature, and quite profitable.

One Street analyst, RBC Capital Markets Mark Mahaney, thinks that Google could implement a capital return program starting in 2015. Is it time for the search giant to start giving back?

A capital return programme could help prop up shares

For starters, Google shares have had a rough year. Peers Apple and Microsoft have handily outperformed the Nasdaq Composite, while Google lagged by a fair margin. 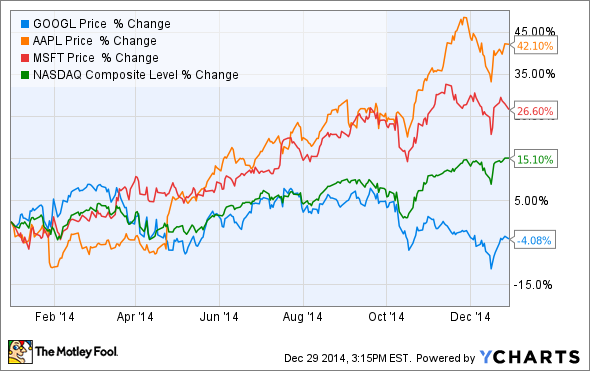 As Google continues to mature, investors may not be able to count on capital appreciation like they could during the companys growth days.

Implementing a capital return program could help prop up shares. A dividend could potentially attract income-oriented investors, broadening Googles investor base, while a share repurchase program could drive earnings accretion to the extent that it offsets the dilutive effects of equity compensation.

But at what cost?

If Google wanted to offer a dividend yield thats competitive to its peers, it might want to pay out anywhere from 1.5% to 2.5%. Thats approximately how well Apple, Microsoft, and Intel pay their respective shareholders.

Not counting the super-voting Class B shares, Google has a combined 624.1 million Class A and Class C shares outstanding. If Google wanted to pay a 2% dividend yield, then that would translate into approximately $10.60 per share per year, or $6.6 billion total. This is before considering any type of share repurchase authorization. Thats a modest sum and Google can afford it.

Theres plenty more where that came from

Googles balance sheet is quite strong. The search giant currently has $62.3 billion in cash and marketable securities on the books. Thats up from $42.6 billion in total cash three years ago. As Googles cash position continues to grow, as will the case for giving some of that money back to shareholders.

Even if you net out the companys modest debt position of $5.2 billion (including short term and long term debt), Google still has a net cash position of $57.1 billion. Operating cash last quarter alone was $13.4 billion, so Google is generating cash at a healthy clip.

However, the bigger hurdle would be where all that cash sits. Of its total, $41.8 billion sits overseas held by foreign subsidiaries. Thats over two-thirds of Googles cash residing abroad. But much like other companies before it, including Apple, Google could turn to public debt markets to fund a capital return program as a way to avoid repatriation taxes. Google could likely issue paper at a 2% interest rate, substantially less than the 35% repatriation rate.

If Google chooses to repurchase shares and funds this program with debt, then Googles weighted average cost of capital would also decline, just like Apple.

Theres another challenge though. Googles capital structure includes three different share classes, a structure that was implemented earlier this year with the addition of the third class. Class A shares get one vote per share, Class B shares (only held by company insiders) get 10 votes per share, while Class C shares get no votes per share. The net effect of this new structure is further consolidation of voting rights for Larry Page, Sergey Brin, and Eric Schmidt.

That triumvirate owns 92.5% of all Class B shares, representing nearly 61% of all voting power. As such, these three execs call all the shots, and the structure severely limits the possibility of any activist investor accumulating the sufficient voting power to enact any type of meaningful change. In order for a capital return program to become a reality, Larry, Sergey, and Eric have to want it to.

To be fair, even though Apple has a simpler, single-class share structure, its sheer size also precludes the notion of an activist investor accumulating a large position with meaningful voting power. Even a 5% stake in the Mac maker would cost $33.5 billion right now. At last count, Carl Icahn had 53 million shares, or just over $6 billion worth. But at the same time, large institutional investors can join forces (and voting rights) and rally together to enact change. This cant be said for Google.

Mahaney believes that Google would have nearly $80 billion in cash by the end of 2015, which is approaching the roughly $100 billion that Apple had on hand when it implemented its capital return program. Its time for Google to start giving back, and 2015 is as good a year as any.

Evan Niuowns shares of Apple and Facebook. The Motley Fool UK owns shares of Google and Apple. We Fools don’t all hold the same opinions, but we all believe that considering a diverse range of insights makes us better investors.