Apple Inc. Unveils The iPhone 6 Along With Some Surprises…

This is an unedited version of an article from Fool.com

WASHINGTON, DC Apple(NASDAQ:AAPL.US) just did something unexpected: it hosted a major product unveiling and there were some major pleasant surprises. Most of the time these days, all pertinent details are leaked well in advance, and industry watchers already know whats coming. This time around, Apple had a few tricks up its sleeve. Weve got an awful lot to cover.

Apple gets into the phablet market
To kick things off, the iPhone 6 and iPhone 6 Plus are now official. With the iPhone, there were no surprises. The two rumored models indeed sport 4.7-inch and 5.5-inch displays, in line with expectations. The new iPhones will get higher resolutions in what Apple is calling Retina HD displays.

Contrary to expectations, the iPhones willnotget sapphire displays. There was no mention of the materials use during the iPhone portion of the presentation. As a result, shares of sapphire partnerGT Advancedgot utterly crushed, down 14% as of this writing.

Both models will get next-generation A8 processors and M8 motion co-processors. Apple is also adding a barometer to its smartphone, which will help measure things like relative elevation with air pressure readings. The iPhone 6 models are getting faster LTE with carrier aggregation, Voice-over-LTE support, and 802.11ac Wi-Fi. For the first time, Apple is adding near-field communications (NFC) to the iPhone 6, which will be used in its payments service, but more on that later.

Apple is again choosing to sit out of the megapixel race, keeping the iPhone shooters at 8 megapixels. Instead, it is increasing performance in other ways, such as improving autofocus times and low-light performance.

There are two important differentiating features that will be reserved for the iPhone 6 Plus. First, since the 5.5-inch model has such a large display, Apple has tweaked the interface of many of its first-party apps to include an additional pane, taking advantage of the extra real estate. That also includes a larger keyboard with more keys, and Apple will encourage developers to optimize apps around the larger display. Also, only the 5.5-inch model will get optical image stabilization (which was rumored), while the 4.7-inch model will get digital image stabilization. 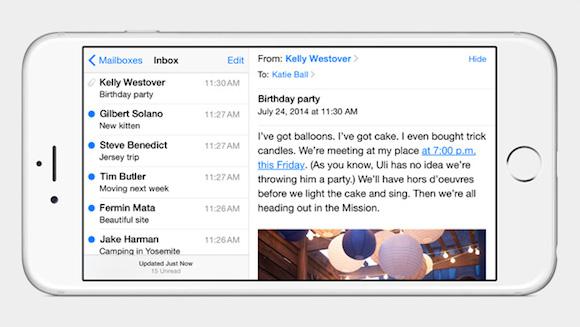 Apple is using an interesting pricing strategy. The iPhone 6 will start at the standard $199 on contract, but its tweaking the storage configurations. Add another $100 for the iPhone 6 Plus. The current iPhone 5s and 5c will move down a pricing notch, in line with Apples normal pattern.

Eliminating the 32 GB storage option is a clever move. Instead of including 32 GB in the entry-level model, which other OEMs are doing, Apple is standing pat at 16 GB. In doing so, it can enjoy modestly higher margins for the entry-level models, while simultaneously providing a strong upsell incentive to the 64 GB model for an extra $100. That translates into either margin upside or average selling price upside.

Pre-orders for the iPhone 6 start on Friday, and the device launches on September 19. Watch out, Samsung.

Apple Pay is here
At long last, Apple is entering the payments market. This move has been talked about for years, and the Mac maker hasfinally jumped in. Tim Cook noted that every other company that has tried to reinvent the payments process has failed, in part because these companies have focused on self-interest instead of the user experience. The service is called Apple Pay.

Apple Pay will use aforementioned NFC chip combined with Touch ID for biometric security. The service will use passbook, and store payment information in a new chip that Apple calls the Secure Element. Users can use credit cards that are already on file in iTunes, and add new cards by taking a picture of them.

Card numbers are never stored on the device; instead, Apple will also use a system of dynamic security codes and one-time card numbers. That means original card numbers are not given to the merchant. Payments can also be suspended through Find My iPhone in case the device is lost.

Service chief Eddy Cue took some subtle jabs atGoogleby placing a lot of emphasis on user privacy. Apple will not know what users buy, where they bought it, or how much it cost. Cue added, We are not in the business of collecting your data. Apple is partnering with all the biggest payment networks and card issuers, which covers 83% of domestic credit card purchase volume. On the retailer front, Apple has gotten 22,000 retailers onboard.

Apple Pay will even work with online transactions. One challenge that many businesses face with mobile is that users are averse to inputting all their payment information on such small screens. Apple Pay will simplify this entire process. The service can also be integrated into apps, and is releasing a payment API. The service launches in October, and Apple will expand Apple Pay internationally in the future.

Apple Pay does look like it has the potential to be a revolutionary service, considering its ease-of-use and the long list of partners that the company has inked deals with.

For the first time, Tim Cook used the classic One more thing line that his predecessor was known for. Thats rather symbolic because the Apple Watch will be one of the most important products that he will be judged for. Apple is setting out to redefine what people expect from smartwatches. He noted that all of Apples game-changing products have entailed revolutionary interface changes, and the company hopes to do it again.

Existing smartwatch interfaces make extensive use of the touchscreens, but the problem there is that your finger obstructs your view. Apple Watch will use a touchscreen, but adds functions to the familiar dial on the side, which Apple calls the Digital Crown. The crown can be used to zoom and scroll, and can be pushed to return to the Home screen. The display is also now pressure sensitive and can distinguish between taps and presses. Unlike the iPhone, Apple Watchisgetting sapphire, so GT Advanced isnt entirely on the sidelines.

Apples product lines tend to be very focused, emphasizing depth over breadth. This was a key question as Apple enters a fashion category, since personalization and customization are important values in wearables. There will be 3 distinctive collections, various colors within each, and the device will come in 2 sizes (38 mm and 42 mm). On top of that, the watch faces are highly customizable, and there will be a variety of different straps that can be swapped out. Apple says there are millions of unique combinations.

As expected, there is a heavy emphasis on health and fitness, using a variety of sensors within the device. Apple has come up with new ways to communicate through its smartwatch, such as sending doodles or your heartbeat, but these offer questionable value.

An iPhone will be required to fully utilize the Apple Watch, tethering to features like GPS and Wi-Fi. Another important differentiating feature is that Apple Watch will support Apple Pay, asrumored, which could also be another reason it relies on the iPhone.

The retail price will start at $349 and Apple Watch ships in early 2015. That makes sense since there have been absolutelyno hardware leaks, suggesting it hasnt entered mass production. Cook said it would be worth the wait, which is why pre-announcing the devicewas smart. Prospective smartwatch customers that are waiting arent going to buy competing devices.

Theres more where that came from
This was one of the busiest product unveilings that Apple has had in recent years. Tim Cook has now fulfilled his promise that Apple will enter a new product category, and the Apple Watch does look like it will redefine the nascent smartwatch product category. It is very well differentiated from the competition, and will further strengthen Apples product halo.

As Apple finally gives in to peer pressure by entering the market for larger phones, pent-up demand within its large customer base will trigger a massive upgrade cycle over the holiday shopping season. Even beyond the larger displays, the company has provided numerous compelling reasons to upgrade, such as Apple Pay.

Keep in mind that this show isnt over yet. Apple is again expected to host an October event to discuss new iPads. Its already turning out to be a very busy fall, and these products havent even launched yet.

Apple currently yields around 1.6%, and if it’s dividends you’re interested in then you need to read“How To Create Dividends For Life“,the latest special report from The Motley Fool’s top analysts.

The report explains howdividends havedriven most of the gains in the FTSE 100since 1999 andincludes advice on structuring an income portfolio.

3 Reasons To Buy Optimal Payments Plc Today Blinkx plc Gets Close To 40p, But Will The Stock Hit 60p?