Apple Inc. Stock At All-Time Highs: Is It Still a Buy?

WASHINGTON, DC Its taken 2 years to get back to this point. After peaking in September 2012 at approximately $705 (pre-split),Apple(NASDAQ: AAPL.US)) has now climbed all the way back after its prolonged pullback to fresh all-time highs. Shares have now traded over $105, the equivalent of $735 pre-split.

Naturally, with shares back to all-time highs investors are now wondering if its too late to get in, or if they can still buy Apple. Lets take a look.

Word on the Street
For starters, lets consider the Streets opinion on Apple. According toYahoo!Finance, the average price target for Apple is $115, which represents about 10% upside from here. That may not seem like a lot, and its also a modest hurdle for theS&P 500to clear in the next year, which determines if Apple were to outperform or underperform should it hit that average price target.

For the most part, the Street remains bullish overall, suggesting that its not too late to buy.

Apple pays
Re-initiatedin 2012after a 17-year hiatus, Apples dividend continues to climb higher as the company remains committed to returning its copious amounts of cash to shareholders. While the majority of Apples capital return program is being allocated to share repurchases, its still paying out hefty amounts of cash in the form of dividends.

Apple increased its quarterly payout by 15% in early 2013, following up with an 8% increase earlier this year. The Mac maker usually updates its capital return program in March or April, which is likely when investors will find out more about the next dividend boost. 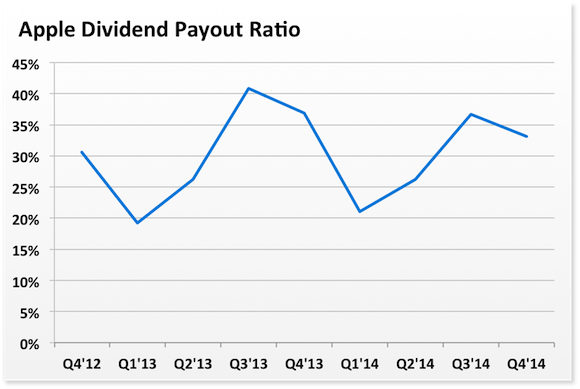 Theres no magic number when it comes to payout ratios, but generally investors prefer a figure in the 30% to 60% range. A payout ratio thats too low may have investors asking for more, while a ratio thats too high could potentially suggest that the company is beingtoogenerous and a dividend cut could be in the cards.

At current levels, Apples dividend represents a 1.8% yield. Thats less than some fellow tech giants likeMicrosoftandIntel, both of which yield around 2.7% right now, but its still a respectable yield nonetheless. Theres something for income investors here too.

Apple buys (itself)
As mentioned, the other aspect of Apples capital return is its massive share repurchase authorization, which currently sits at $90 billion. This is where Apple has been focusing most of its capital return efforts, believing shares remain cheap.

It should be telling that Apple just embarked upon itsfourth accelerated share repurchase programwhile shares are at all-time highs. Thats literally Apple telling you that it thinks its shares are cheap at current prices and putting its money where its mouth is because its also repurchasing shares itself. While many companies haverather bad timingwith repurchases, its hard to argue that Apple is overpaying for itself when its trading at just 16 times earnings (a discount to the S&P 500).

Thanks to the resulting earnings accretion, EPS growth has been continuously outpacing net income growth by a healthy margin. 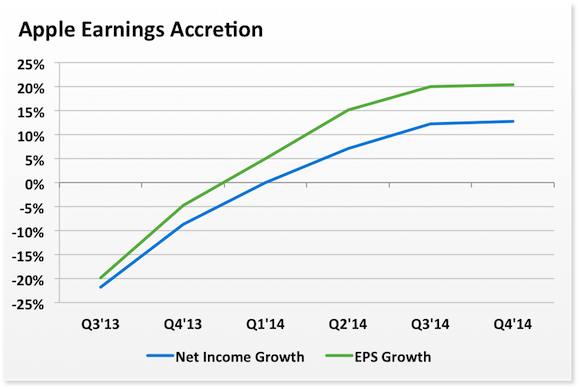 Considering the sheer magnitude of Apples repurchase program, its also worth noting that share repurchases can drive capital appreciation. As Apple continues to amplify EPS growth through aggressive repurchases, its earnings multiple will contract (all else equal) due to a larger denominator.

An all-time record quarter is around the corner
Apples guidance for the current quarter ismind-boggling. The roughly $14.4 billion that the company expects to make over the holidays is well above what any other company in the S&P 500 is capable of producing, including oil companies. As Apple has just dramatically broadened its addressable market by launching larger iPhones (opening up a whole new world of potential Android switchers), Apple could very well have another blowout quarter up its sleeve. The iPhone and Mac businesses are as strong as ever, and the iPads recent woes are possibly temporary hiccups.

When the company releases its fiscal first quarter earnings in January, the figures could potentially be a positive catalyst as the quarter is expected to set new all-time records in both top and bottom lines. Shortly thereafter, Apple Watch will ship, potentially boosting investor confidence (and share prices) further.

Yes, you can still buy Apple.

Both Evan and The Motley Fool UK own shares in Apple.

5 Dirt-Cheap Stocks: Trick Or Treat? Does Marks and Spencer Group Plc Remain A Buy Despite Worrying NEXT plc and Supergroup PLC Results?