Apple Inc. Reports a Blowout Quarter – and Is Expecting Another One!

A version of this article originally appeared on Fool.com

WASHINGTON, DC Summer is usually a slow time forApple(NASDAQ:AAPL.US), much as it is for other consumer-electronics companies. For the iPhone maker specifically, summer is right before its widely publiciSed iPhone launches, which should intuitively create purchase delays as consumers wait for the latest and greatest. Not this time.

Starting with the headliners
Most of the pertinent metrics tapped new records for the quarter ended in September. Revenue came in at $42.1 billion, which translated into $8.5 billion in net income. Thats $1.42 per diluted share. Gross margin stayed strong at 38%, a modest sequential decline. Apple also declared a $0.47-per-share quarterly dividend.

iPhone is officially a $100 billion business
Despite all of the speculation surrounding the iPhone 6, iPhone unit sales came in well above expectations at 39.3 million, a 16% jump from a year ago. Analysts were expecting just 37.5 million units. Average selling prices put up an encouraging $42 jump to $603. That helped trailing-12-month iPhone revenue cross the $100 billion threshold for the first time ever. 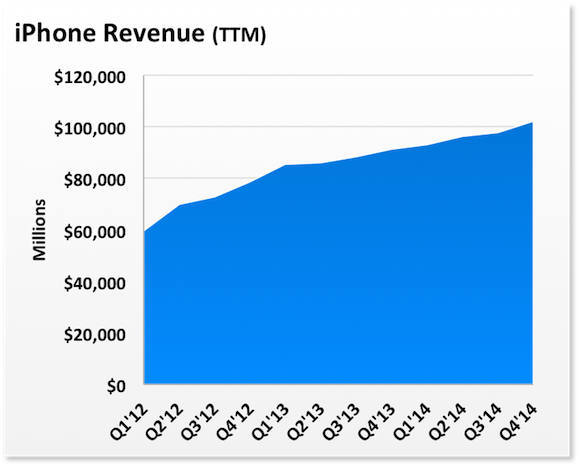 Even better yet, Apple normally puts up another ASP increase during the calendar fourth quarter following the launch of new models, so the company could have an ASP tailwind this holiday quarter.

Apple is unsure of when it will reach supply and demand balance, since it currently has a significant backlog of orders. The company is selling every unit it can make, and CEO Tim Cook said supply and demand are currently so far apart that theyre not even on the same planet.

iPad is still lagging
Technically speaking, the iPad remains a relative soft spot in Apples results, with unit sales falling 13% to 12.3 million. Theres a broader deceleration occurring in the tablet market, and Apple is not immune. Still, Cook continues to consider the current situation little more than a speed bump on the long-term road to riches.

He also added some useful context. First, since Apple has been in the tablet business for only four years, its difficult to determine what the upgrade cycle will be. Everyone expects it to be longer than smartphone upgrade cycles, but it remains unclear by how much. On top of that, whats not shown in these high-level figures is which countries Apple is selling in, or the demand characteristics in those countries.

Adoption in developed markets was very quick to take off, and those users are still trying to determine their upgrade cycles. Sales are now shifting to emerging markets, where 50% to 70% of buyers are first-time tablet buyers. That has important long-term implications, since those users are now on the Apple upgrade track.

Cook is less interested in the quarterly trends and remains extremely bullish on the bigger picture.

Macs set a new record
Apple sold 5.5 million Macs during the quarter ended in September, a new record and again outpacing the broader PC market. The back-to-school season was particularly kind to the company, according to Cook.

Management attributed this strength to its laptop lineup, which is even more impressive considering the mid-2014 upgrades were modest, as Apple is still waiting forIntelto ship its Broadwell chips in volume. 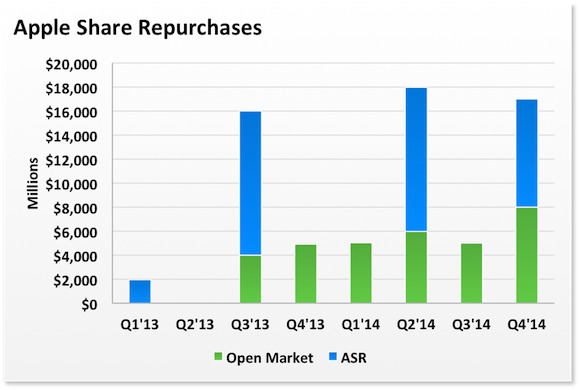 Share repurchases this quarter totaled $17 billion, consisting of a $9 billion ASR program and $8 billion in open market repurchases. Even as Apple shares are now within spitting distance of all-time highs, it clearly still thinks the current valuation is compelling. Cook more or less agrees withCarl Icahn.

Once again, the buybacks helped juice EPS growth. Diluted EPS was up 20%, outpacing the 13% jump in net income. Apple has now repurchased nearly $68 billion to date, leaving over $22 billion of its total $90 billion repurchase authorization. That should hold it over until the next update to its capital return program, which is typically in March or April.

Some reporting changes
Starting in fiscal 2015, which just kicked off, Apple is also making changes to its reporting methods. The last reporting change occurred about two years ago, when the company unbundled accessories and peripherals from their related segments and established the iTunes/Software/Services segment.

Going forward, iTunes/Software is being renamed the Services segment, but this will also include other services such as Apple Pay. Other Products will include the current accessories business, along with the iPod, Apple TV, and forthcoming Apple Watch.

One analyst asked whether grouping Apple Watch into the Other Products segment says anything about Apples expectations for its upcoming wearable. Cook responded decisively, It says nothing about our expectations. Rather, the decision was based on current revenue bases, and Apple may decide to break out Apple Watch performance at a later time.

That may be somewhat frustrating, especially at first, but if Apple Watch becomes material to the business, then Apple will probably begin disclosing pertinent figures. Until then, Apple will probably tout various milestones as it hits them from time to time.

Additionally, Apples retail results have long been a distinct segment, which has always made its geographical disclosures incomplete. For instance, all retail stores have been included in this reportable segment, regardless of where they are located. Apple is dissolving the Retail reporting segment and will begin including those results in the stores respective geographies. That will make the geographical segments much more relevant and usable (finally), particularly the all-important Greater China segment.

Its the time of the season
As Apple heads into the holiday season with afresh product lineup, its expecting another all-time record quarter. Revenue is expected in the range of $63.5 billion to $66.5 billion, which represents 13% growth at the midpoint. That would be the highest growth in eight quarters, before even considering the possibility of a blowout.

So much for slow summers or falls or winters for that matter.

If you’re looking for somehigh-quality investment opportunities, you should definitely read The Motley Fool’s “5 Shares To Retire On” report.

It featuresfive top-quality shares— companies that have an outstanding record of providing reliable shareholder returns — selected by our team of expert analysts.

Both Evan and The Motley Fool own shares in Apple.