3 Key Reasons Apple Inc. Stock Could Continue To Shine In 2015

WASHINGTON, DC Apple (NASDAQ: AAPL.US) was one of the best megacap stocks for most of 2014. Despite a sharp pullback following the companys earnings report in late January, the share price rose about 38% over the course of the year. 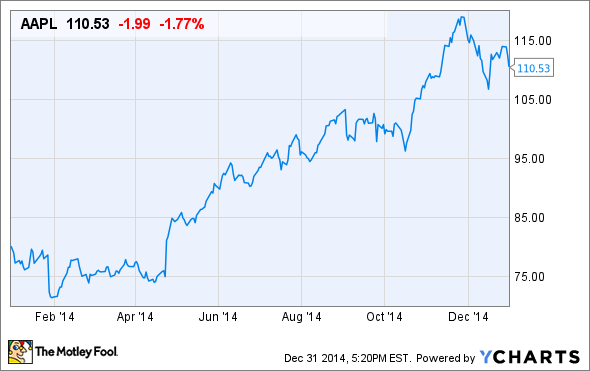 The gain could have been bigger but for a 7% slump in December. The recent pullback suggests many investors are skeptical of the companys ability to maintain its momentum in 2015. We dont know what the stock will do in the future, but here are three reasons why Apple shareholders could see further stock gains.

Blowout iPhone sales
It seems clear Apple shattered all previous iPhone sales records in the recently ended holiday quarter. The iPhone 6 and iPhone 6 Plus models now account for about 20% of all iPhone usage, according to Fiksu, indicating many people have upgraded their older devicesin the past few months.

Demand for the iPhone 6 and iPhone 6 Plus will drive strong sales and earnings growth for Apple in 2015. Photo: Apple.

Apples suppliers are finally catching up to demand for the new iPhones. With retail availability improving and the Chinese new year coming up in mid-February, Apple is well-positioned to post strong iPhone sales growth again this quarter.

Many of those customers will undoubtedly opt for cheap Android phones. However, Apple now has a full portfolio of LTE-compatible iPhones at a variety of screen sizes and price points in order to appeal to a wide swath of Chinese consumers. Thus, Apple has a good chance of selling tens of millions of iPhones to China Mobile customers in each of the next two years.

An iPad rebound could be coming
A return to growth for the iPad product line in 2015 would remove one of investors biggest concerns about Apple stock.

Apple later this month is likely to report a fourth consecutive decline in quarterly iPad sales, and the falling numbers could continue into the first half of 2015.However, by the second half of the year, the iPad product line could return to sustainable long-term growth. By then, Apples mobile enterprise partnership with IBM to create more than 100 industry-specific enterprise apps for iOS should be driving higher iPad adoption by businesses.

The likely introduction of a 12- to 13-inch iPad at some point this year also could convince companies to make more extensive use of the Apple tablet. This product might reverse the slide in average selling prices and profit margins that has dogged the iPad product line for the past two years.

Apple Watch hits the market
A third likely catalyst for Apple in 2015is the launch of the Apple Watch, which is scheduled for the first half of the year. Analyst estimates for Apple Watch unit sales span a wide range, but many expect the company to sell 20 million-30 million in the first 12 months of availability.

This seems plausible and possibly even conservative based on various data points. First, Apple sold about 19.5 million iPads in the first 12 months of that devices availability, starting in 2010. At that time, many fewer people used Apple products than do now. Apple should have an easier time encouraging adoption of new products today thanks to its large base of loyal customers.

Also, there are more than 300 million iPhone users today globally, which means Apple would have to convince only one in 10 to buy an Apple Watch to sell more than 30 million units. Another factor to consider when evaluating the potential impact of the Apple Watch is that the average selling price could be far above the starting price of $349. Some industry insiders believe Apple could sell high-end gold versions of the Apple Watch for up to $5,000, going head-to-head with traditional luxury watchmakers.

This could make the Apple Watch more like the Mac in terms of pricing than any other product in the Apple lineup. The Mac mini sells for as little as $499, and the MacBook Air starts at $899, while the top-of-the-line Mac Pro goes for $3,999. The result is an average selling price across the whole Mac lineup of $1,274 during fiscal 2014.

Assuming a similar range of Apple Watch prices, the average selling price could perhaps reach$500-$750. If the company can sell 30 million devices per year, Apple Watch could instantly become a $15 billion-$20 billion business, which would be significant even by Apples standards (though nowhere near the scale of the iPhone business).

Strong earnings growth should lead to stock price appreciation
Between the new iPhones strong momentum, the potential for a return to iPad sales growth, and the Apple Watch launch, Apple has numerous catalysts to deliver plentiful earnings growth throughout 2015.

Furthermore, these catalysts wont disappear when the calendar turns to 2016. If anything, Chinas move to LTE smartphones will gain steam in the next two years. Meanwhile, 2016 would be the first full year of sales for the Apple Watch and the rumored 12- to 13-inch iPad.

Once investors become more comfortable with Apples profit growth trajectory, the stock is likely to begin rising again. Today, it trades for just 14 times projected fiscal 2015 earnings. That is below the market average, even though Apple is growing earnings faster than most companies and has more than $100 billion in cash on its balance sheet. This makes Apple stock a good buy for 2015 even at $110 per share.

Adam Levine-Weinberg has the following options: long January 2016 $80 calls on Apple and short January 2016 $120 calls on Apple. The Motley Fool UK owns shares of Apple. We Fools don’t all hold the same opinions, but we all believe that considering a diverse range of insights makes us better investors.